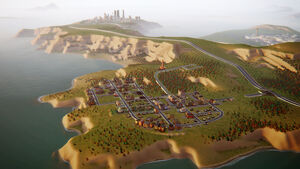 Regions are the part of SimCity where multi-player activity occurs. There are 8 regions, and each region contains from 2 to 16 city sites and varying numbers of Great Works sites.

A player has the opportunity while setting up their game to choose the region, and whether the region will be public or private. In a public region, anyone on the server is welcome to join the region and claim a city. In a private region, only those players invited by the creator of the region can claim cities.

Neighboring cities have various affects on each other, both positive and negative.

Cape trinity sweeps along the sunny coast of Trinity Bay, along an important shipping route. With only three city sites, Cape Trinity is a cozy region with a good mixture of natural resources and land value.

Deep in the valley of a massive mountain range, this region features the confluence of two rivers into one larger river. Five city sites hug the banks of the rivers while a rail network winds its way through the base of the mountains.

This tropical island destination has sandy beaches ready for the island explorer looking for a laid back adventure in the sun. A wide assortment of natural resources distributed across the islands give each island its own identity.

This heavily wooded region features lush green forests fed by lazy rivers flowing through the region. A wide variety of sites in several groups provide many opportunities for mayors to cooperate to fill the region with massive cities.

Attached to the mainland by only a narrow highway, this small island projects into Sunrunner Bay. This sunny island is a getaway for free spirits and artists. A pair of city sites share this island and all it's natural splendor.

Roll on down the lazy Rye River as it flows through Discovery Delta. This expansive wetland region follows the course of river tributaries with creeks and ponds forming among the city sites. Four groups of cities are situated to develop amazing cities in the delta and complete great works.

This picturesque chain of islands has several cities on each of it's three major islands. These rocky islands sit high in the water, with exposed cliffs dictating interesting city planning choices. Island shores with spectacular ocean views lend themselves well to developing wealthy resorts.

This massive region features sixteen diverse city sites grouped into four clusters. Titan Gorge runs down the heart of the valley, ending at a bulge in the Reposado River. A soaring rail trestle spans the wide gap between two expansive plateaus.